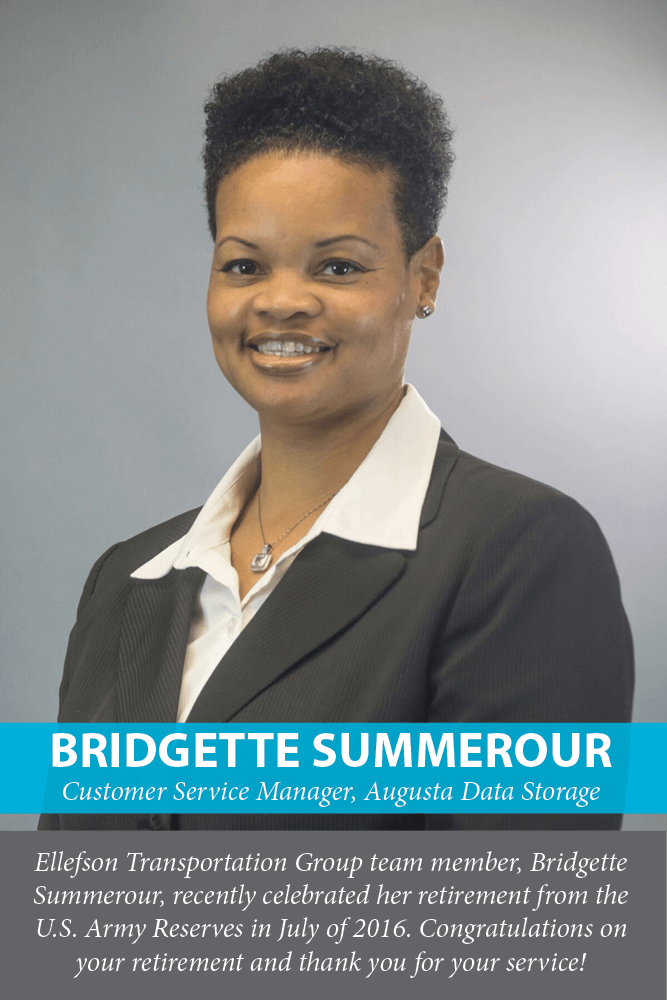 At Ellefson Transportation Group we are so lucky to have a great team of employees to help us support all the aspects of our business day in and day out. We are even more fortunate to have people on our team who also provide the ultimate support to our country, through service in the Armed Forces. We are thrilled to be able to congratulate over very own SFC Bridgette Summerour on her recent retirement from the Army Reserves on July 31, 2016.

Bridgette currently serves as our Customer Service Manager for Augusta Data Storage and has been a member of our team for over 10 years. Since joining Augusta Data Storage, she says she can see growth and changes, just in her time here, including a more professional working atmosphere, better training for employees, and a more cohesive team environment. Bridgette says one of her favorite aspects of her job is that she gets to help customers “solve problems” all day. “I get calls all the time about what can I do I have 300 files and I need them moved by yesterday; and that is “To Easy” something we live by in the Army,” she says.

We spoke with Bridgette more about her experience serving in the Armed Forces in a variety of capacities over the years and we are excited to be able to share her experiences with you today.

” I first joined the Air Force Reserves because I really wanted to join active duty Air Force but my mother threatened me out of it, so I went on the college.  I actually joined the Army because I didn’t have a job or money to finish college. Some friends had joined and I figured if they could do it I could too.

Although I didn’t originally join because of some deep patriotic reason, I did grow to love the Army. It was one of the best decisions I made in my life; it has shaped me into the person I have become today. A leader, a follower, one with courage and integrity. Sometimes I believe I am a soldier before I am a woman, I am proud to have served my country and if asked to do it again I would.

I first joined the military as an Air Force Reservist in my home state of Louisiana, where I served for 5 years. Following that, I served 15 years on Active Duty and 8 years in the Army Reserves. My first active duty station was at Fort Benning, GA then on to Fort Campbell, KY, Fort Hood, TX, two tours in Mannheim Germany, and a tour in Iraq as a part of Operation Iraqi Freedom.  I received an Honorable Discharge from active duty in 2004 of my own accord and I realized I missed the army so much that I elected to join the Army Reserves in 2008.

While in the Air Force I did Administrative work, on active duty I was a Truck Driver; which I loved, transporting supplies and soldiers. As I grew in rank and grade I became a leader of men (Soldiers), that role was more of a supervisor role. Then, in the Army Reserves I served as an Observer Controller Trainer ensuring soldiers were trained before sent on a deployment.

Even after my retirement, I will continue to be a leader and know when to be a follower, stand up for what I believe in; stand up for those who can’t stand up for themselves.  I will be a soldier for life; the order of who I am; A child of God, Mother/Wife, A Soldier in that order. “

During her time in the service Bridgette received a variety of recognitions including 2 Army Commendation Medals, 4 Army Achievement Medals, several Good Conduct Medals and a Global War on Terrorism Expeditionary Medal, “Just to name a few,” she says, “but nothing extraordinary.” When we asked Bridgette what she planned to do with her free time she said “Sleep in! No, I don’t really know, I’m just glad to have been on this journey.” We did happen to hear that Bridgette plans to use some of her free time to go back to school, and we are very excited to support her through this next journey in her career. She will be working towards an Associates of Science in Business Management and estimates she will wrap up her studies by Spring of 2017.

We hope you will join us in Congratulating Bridgette on her recent retirement from the Armed Forces and extending a heartfelt “Thank You” for her dedication and service to our country throughout the years. We are so lucky to have great people like Bridgette on our team and look forward to how she will help our team continue to grow and improve in the coming years!